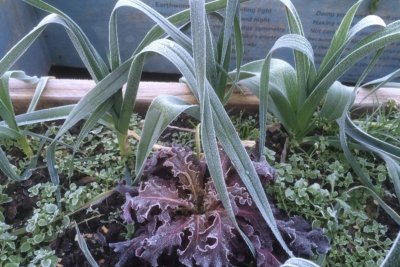 Autumn and winter food growing that can make it through the colder seasons. Copyright: Paul Richens | Blue Dome Synergies

Do you think that there’s nothing worth growing through the colder months? Well, think again. We’ll see what autumn and winter mean to plants, and look at the range of delicious crops you can grow and harvest during this part of the year. We’ll also discuss what preparations you’ll need to make during the summer months to have plants well established by the time the cold sets in.

Paul has been an organic gardener and worm-botherer since his farming parents gave him his own plot at the age of three. He worked for many years as a scientific photographer at the Natural History Museum, which informed his understanding and love of natural history; then as a video producer/director in the United States before he set up his own horticultural training company, Blue Dome Synergies, in 2008. He was Gardens Manager for Global Generation at the Skip Garden at King’s Cross for ten years while also running workshops for Capital Growth and supporting other London community gardening projects. Now semi-retired, he is still passionate about growing organic vegetables in any small space and advocates working with nature, using a ‘no kill’ policy. Among other subjects soil organisms and their interaction with plant life fascinate him.