The latest issue of London’s magazine for ethical eating is ready to post to new London Food Link supporters and available from stockists across the capital. 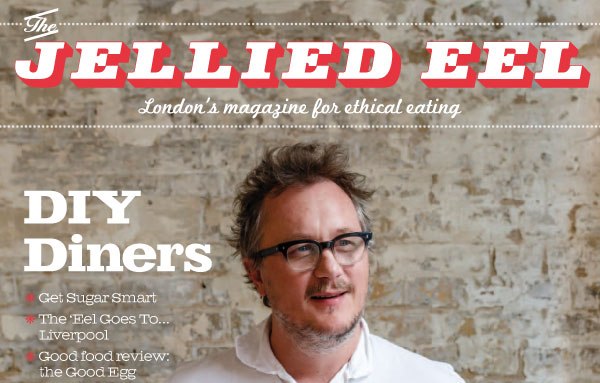 Summer’s here at last, enticing pale Londoners out of their dens with promises of culinary and horticultural pleasures. Reflecting the abundance of the season, we’ve got a veritable cornucopia of features in The ‘Eel this issue.

We’ve been snooping around in the kitchens and store-cupboards of some of London’s most innovative restaurants to bring you  news of an emerging obsession of in-house production. Ever notice some eateries proudly proclaiming that they bake their own bread? Well, the folks we met have gone one step beyond, curing, pickling and fermenting with aplomb - in pursuit of quality and keeping things truly local.

Also as part of this continuing focus of people who grow, make, cook, save and sell good food in and for the capital, we grilled a gifted urban farmer on what he gets out of his job, and found out what it takes to raise a proper chicken.

The ‘Eel also went on another excursion, roving further afield this time all the way up to Liverpool, where we discovered an exciting emerging food scene.

We’ve got some more in-depth features too. Sugar’s been in the news a bit recently, getting kicked around like a big, syrupy political football - so it feels timely to report on the work of the Sugar Smart campaign, a collaboration between Sustain and the Jamie Oliver Food Foundation. We also take a look at how Brexit will impact our farmers as well as our food prices, as well as summarising a key recent report on hospital food.

Aside from features, The ‘Eel has so much more. Do you fancy getting up to speed on new ethical eateries near you, or how about getting involved in or supporting urban food growing? The Jellied Eel is your indispensable guide to London’s progressive food scene, as well as reflecting the important work, aims and new crowfunding campaign of London Food Link, Sustain’s network that works towards a food system that benefits all Londoners.

How do I get my hands on The Jellied Eel?

The ‘Eel is posted to paid-up London Food Link supporters once every four months, and is also available from around 150 stockists across the capital.