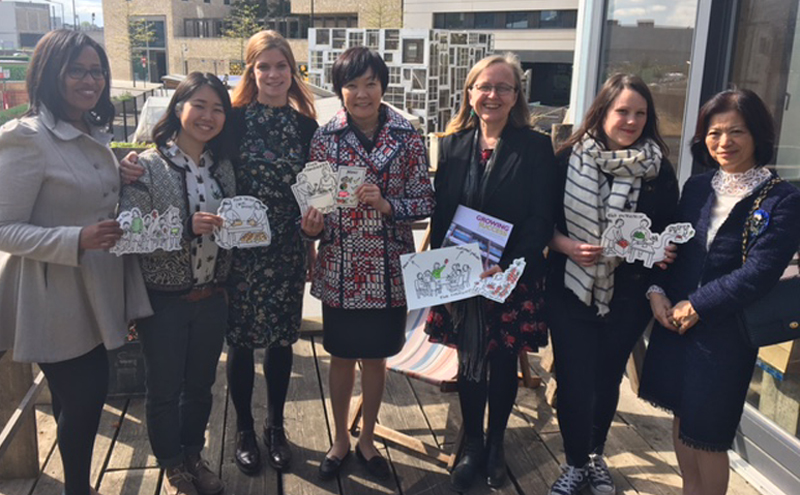 In April, Sustain had the honour of hosting Akie Abe, spouse of Shinzō Abe, the Prime Minister of Japan. Mrs Abe is known for her keen interest in food. She owns a block of rice paddies in Yamaguchi Prefecture and serves the rice harvested at an organic izakaya (traditional Japanese restaurant) called UZU in Tokyo’s Kanda district. So we took her on a visit with Japanese Embassy colleagues to visit the beautiful and productive Skip Garden in the King’s Cross area of North London.

Once again, London’s community gardens demonstrated their value in full colour. The Skip Garden is a gem of a garden, bringing vegetables, job opportunities and welcome community and plant diversity to one of London’s biggest housing and office developments. Fruit, vegetables and herbs grow in containers that make the garden not only an exemplar of recycling, but can also be moved on if the developer wants their land back. Within just a stone’s throw of Google’s new headquarters, beautiful meeting spaces are available amidst the lettuces, created out of shipping containers and a faceted myriad of reclaimed windows.

The Skip Garden project run by Global Generation trains young people to grow food, learn about composting and recycling, and to make money out of trading in food and other garden products. The garden welcomes many local school children every year to learn about keeping chickens, growing food and working with nature. As the Skip Garden’s Gwen and Rachel explained to Mrs Abe, the project is now over 40% self-funding from its own activities – an inspiring story of success.

Mrs Abe showed a great interest in the Skip Garden’s beehives. Through her interpreter, she explained that Japan shares the UK’s concern about the impact of pesticides on precious bee populations, with increasing interest in organic food among Japanese people. She has beehives of her own at the Prime Minister’s residency to help spread the word. Sustain shared news of activities across London, training community gardeners to cultivate people, plants and pollinators.

The Japanese delegation heard about how such work has been replicated through Sustain’s Capital Growth campaign. This aimed to establish over 2,000 new community food growing spaces for London by the end of 2,012, working with the Mayor and London Food Board. What an ambitious goal, the Japanese delegates agreed. And among the plants and bees of King’s Cross, we were able to tell them that our ambitions have been met and exceeded, with well over 100,000 people in London now involved in community food growing and over 2,500 gardens now involved.

Over cups of steaming green tea in a ship-container meeting room looking down over the garden, our Japanese visitors heard more about Sustain and London Food Link’s work, as part of the London Food Strategy – now more than a decade old. Sustain’s Kath Dalmeny and Sarah Williams have this year been appointed to the new London Food Board, working with the Mayor of London to oversee a refreshed Food Strategy. We set out drawings among the teacups – illustrations of early efforts by inspiring social entrepreneurs across the capital to improve London’s food. We told stories of individuals working alone to improve school food, hospital food, restaurants, sustainable fish sourcing, neglected green spaces and failing food markets.

Then we described how these individuals started to teach children to appreciate good food, develop skills through growing and making, and companies to start changing the way they do food business. We talked about local authorities stepping up to tackle disadvantage through food, and also providing green space for people and bees. And we shared reports tracking how real measurable progress has been made in the space of just a decade.  Social entrepreneurs in food have begun to join up to become so much more than the sum of their parts, demonstrating what can be done when people put their collective minds to it. We talked about campaigns, policy wins, shifts in national school food policy and millions of meals now being served with seasonal fruit and vegetables, higher welfare meat and sustainable fish.

Mrs Abe was also interested to hear of Sustain’s work to help support the Tokyo 2020 Olympic Games organisers in adopting a sustainable fish policy. Sustain was instrumental in the London 2012 Games adopting the first ever healthy and sustainable food policy for such a large international sporting event. This included robust sustainable seafood standards that have now been adopted by caterers that serve over 0.7 billion meals per year. We were pleased to share news with Mrs Abe of Sustain’s Ruth Westcott – Coordinator of the Sustainable Fish Cities campaign – having recently visited Tokyo to take part in a press conference and met with the Tokyo 2020 organisers (TOCOG). Sustain is urging TOCOG to adopt a world-beating sustainable fish policy worthy of a country like Japan, for which seafood is a defining national dish. Mrs Abe took a keen interest and was kind enough to suggest useful contacts.

At all times, Mrs Abe listened intently and interjected with perceptive questions about the future of our food system, and what it might take to bring about positive change. She showed an impressive grasp of the issues, and there was a real sense of common ground. So where better to have such fruitful and fertile conversations than amidst the apple blossoms of the Skip Garden in King’s Cross? We thank both the Skip Garden and the Japanese Embassy for their support in making the visit possible, and Mrs Abe for her time and delightful gift of garden secateurs.