We’re on a roll with our Spotlight Garden programme this March 2022 bringing another great example of education and food growing with Hackney School of Food to inspire you with. 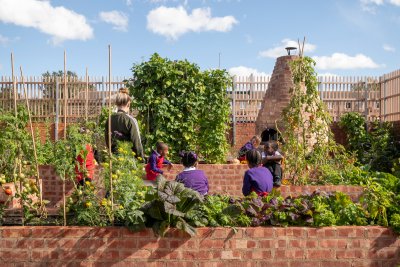 Hackney School of Food | An introduction to the space

It's hard to believe that only a few years ago, the site was abandoned land and derelict buildings at the edge of a London primary school.

Today, a teaching kitchen like no other, set amidst gardens producing seasonal veg & herbs, a wood oven and fire pit which extend out to wildflower meadows, beehives, an orchard and some very friendly chickens! Offering a truly immersive and unforgettable ‘soil to spoon’ experience for school children across the borough of Hackney, Hackney School of Food (HSoF) is the brainchild of LEAP Federation and Chefs in Schools. Together, they work to bring the cooking and growing elements of the National Curriculum to life for thousands of pupils every year. Not to mention a haven for nature and wildlife.

The team is passionate about how food can nourish, nurture and sustain a new generation. By teaching young students about the full cycle of where their food comes from linking to growing and cookery skills, they seek to empower young people to both enjoy food and make healthier choices. The location of this little oasis is significant. The cookery school is situated in a neighbourhood of high levels of family deprivation. Over 60% of pupils receive Free School Meals and most live in social housing with no garden access. Studies show that children growing up in areas of high-economic deprivation are twice as likely to leave primary school obese. So the key ingredient in this story is food education.

We know that education is a powerful way of addressing health inequalities and the work of HSoF addresses the lack of coherent food education in schools by putting food production and cooking at the heart of the curriculum.

Everyone seems happy at HSoF -- even the chickens, Coconut, Berry, Pepper and Ginger are allowed to roam during break times for the children to feed and shower with affection!

Passionate people are behind HSoF, which is no surprise given the flagship nature of this London school food project. We got to meet a key founding member there -- Louise Nichols, Director & Executive Head of LEAP Federation leading on the Learning Education Arts Partnership at the Kingsmead, Gayhurst and Mandeville Schools in Hackney.

You can tell Louise loves her job, not only cause of the real difference it makes to inner city deprived schools, but from how highly she speaks of her team, partners and everyone who’s come through HSoF. She recalls how the then head chef at NOPI, Nicole Pisani and herself bonded over the idea of improving school food by bringing chefs in. When Nicole left the restaurant world to do just that with her, it made headlines. Before long, other schools started approaching them asking how they could get chefs into their schools too. This gave birth to the charity behind HSoF – Chefs in Schools, co-founded with Henry Dimbleby from the School Food Trust who was a parent at Gayhurst School.

While the mission was clear, restaurant chefs needed to be trained for schools. Not to cook of course but to teach pupils how to cook through the National Curriculum for School Food. This is typically challenging for primary schools to do as kitchen classroom resources are often not there limiting lessons to prepare baked goods -- sweet, sugary goods that is. A far cry from the fresh and nutritious foods that the national curriculum sought to improve diet in schools with. For this, they needed a place to train chefs and have them teach in.

The idea to turn the no-longer used caretaker's home into a fully equipped kitchen with an edible teaching garden was there but the money to realise it wasn’t. By pouring efforts into a big fundraising affair, they brought key partners onboard such as architects, parents & governors. When they achieved critical mass, Louise made sure the garden was a central part of the planned food learning experience by bringing Lidka D'Agostino to the fold.

One half of the food education equation at HSoF is food growing. Behind the impeccably designed kitchen garden and a mini fruit orchard with decorative flowers is Lidka D'Agostino. A trained garden designer who before joining this dream project was managing a small garden at neighbouring Rushmore Primary School while also helping private clients with their garden design needs.

LEAP Federation's Head, Louise Nichols, knew of Lidka's work and contacted Rushmore's director in the hopes of having her join the HSoF team. Lidka has always found working with kids to be deeply rewarding but she hadn’t had access to enough green space to really capture their interest with. When Louise showed her the future HSoF site at Mandeville Primary School, Lidka’s mind lit up at the thought of little ones being able to engage with the full cycle of food. Planting a seed, helping it grown, harvesting the fruit, vegetable or edible leaves, carrying it into the kitchen, chopping it up, cooking with and savouring it. Experiencing these things from a young age in such an urbanised environment is life changing. Although Lidka was full to the brim with gardening work already, she also knew she couldn't say no to chance to making HSoF a reality.

Starting off with a few hours a week, she began to transfer her beloved clients to another trusted gardener and put more of her time and energy into reviving and redesigning the school's garden. Lidka took to the garden just when the pandemic struck -- at the same time the building refurb was happening. Lucky for her, she was able to continue working during lockdown and as many became furloughed, she found herself in great company with enthusiastic volunteers who still come out to lend a hand every now and then even after having gone back to work.

While it can get cold working outdoors throughout the year, Lidka's heart is always kept warm by the showering of gratitude from pupils for having the food garden and everything that comes with it.

Connecting the gardens to the kitchen at HSoF is a cheerful man named Tom. Before becoming Head Food Educator here, he was head teaching chef at The Jamie Oliver Cookery School which he thoroughly enjoyed. After some while there, Tom began to feel the need to connect with community more deeply. A big ask of an even bigger city like London. So coming across the role with HSoF was just what he was seeking.

When Tom joined the team in late 2019, the site at HSoF as we know it today was nowhere near ready. Building works had just begun on the kitchen classroom while Lidka was designing the garden. Meanwhile, Tom started working at Gayhurst School, part of LEAP, to head up their kitchen (making 600 portions of school meals every day!). By the time HSoF was ready for action in early 2020, he was fully versed in the ins and outs of the school food ecosystem. Unfortunately, this was at the same time the world first went into lockdown due to the pandemic. So instead, they used the space to make healthy meals for the local community through a partnership with Fare Share and The Felix Project.

When schools opened up again and students began to attend HSoF classes, Tom quickly became a teacher favourite many parents were hearing about from their kids. From the flats surrounding the school, some would spot him in the garden and call over to him to share how much their kids are raving about the food he’s been teaching them to cook in the kitchen classroom. The majority of flat blocks in the area don’t have access to garden space, so making sure HSoF is as much a space for the local community as it is for students in the area is essential.

Kids from as little as 7 years old were picking veg from the garden and chopping it like pros with proper chef knives. Their HSoF lesson time gives them a renewed curiosity to try foods they wouldn’t prior to growing them with Lidka and cooking them with Tom. Hearing them say ‘That was the best thing I have ever tasted!’ and being able to accompany pupils in their personal food journeys and witness their progress progress is what really brings meaning to Tom's job.

Reflections on our community open day

On Saturday 26 March 2022, HSoF opened their gates and ran a community open day like no other as part of their Spotlight Garden feature. Throughout the day, visitors had a full ‘seed to plate’ experience starting with making their very own wholemeal soda bread with Tom in the training kitchen. Once the bread was in the oven, Tom sent folks out to explore the food gardens with HSoF’s Gardener, Lidka, to sow seeds, discover nature trails and make bug hotels.

Our very own Chris Murphy, Head Grower at our flagship allotments at the Royal Parks, was there to welcome and introduce people to the activities, hand out copies of the Jellied Eel Mag (hot off the press!) and on hand throughout the day to answer everyone’s niggling questions about urban food growing. The fabulous Vicki Hird also got stuck in by helping children make bug hotels and share her irresistible passion for biodiversity and invertebrates, reminding us that urban food gardens are a great place to start to rewild our cities (check out her new book Rebugging the Planet).

Beloved chickens Coconut, Berry, Pepper & Ginger were also stars of the day and contributed towards the welcoming atmosphere in the sunshine.

At the end of their visit, people got a chance to enjoy their home-baked bread with soup that Tom had made earlier with goods from the garden and the 60+ visitors left with smiles on their faces, full tummies, beetroot or sunflower seeds to nurture at home and bug hotels to put on their window ledges.

We were delighted to meet so many local community members. Many of the children had themselves visited Tom and Lidka with their classes but the open day offered the opportunity for them to come back with their parents and experience the power of seeing where our food comes from together. We were also excited that the open day attracted people from other parts of London wanting to set up similar initiatives. Also, local residents keen to #volunteer regularly with the gardens - as the new growing season kicks in, helping hands are very welcomed at HSoF. If you’re interested to volunteer there, find out how to here.

Want to find out more about Hackney School of Food? Visit their webpage or contact them here.